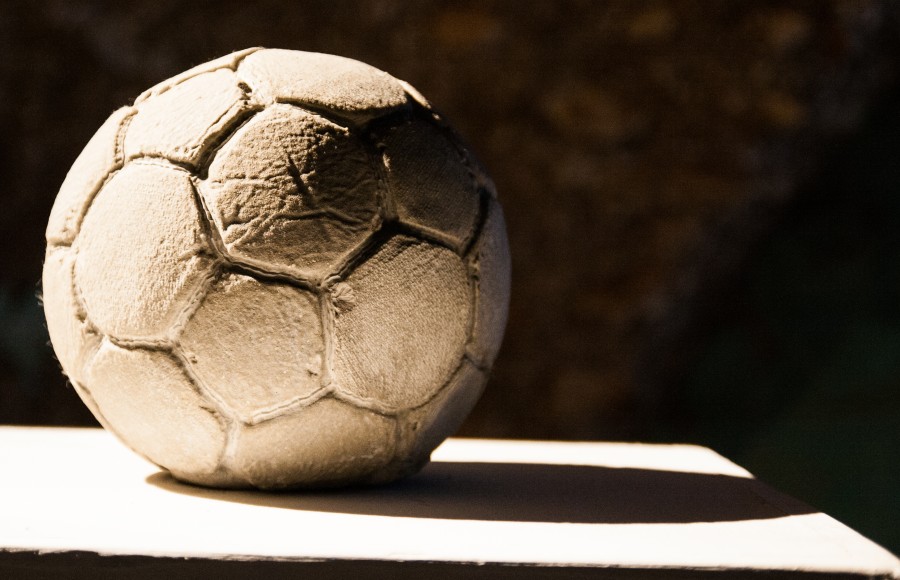 THE FOOTBALL THAT CANNNOT ROLL OR WHAT NORMALITY MIGHT BE

Back in Berlin when I was telling people that I am going to Israel some of them asked me if I am going to a war zone. I would shake off this question like a bug – because it seemed so far fetched to me at that time. Now, having been in Israel while it waged war against the Hamas in Gaza Strip, it still seems far fetched. Of course, I had to duck a couple of times when the rocket sirens went off in Tel Aviv and Jerusalem, I heard the ‘Bang’ the explosion made when these Hamas rockets got intercepted, I heard friends worrying about their soldier boyfriends at the Gaza border. But was that really a war? I don’t think so. It did not feel that way, at least not for me. But it was not normal either. And that makes all the difference: normality. It is a tricky notion.

I spent my early childhood in a 11-story-building that was part of a larger square-shaped complex. In its courtyard was a hideous fountain, a sandbox and a big meadow. Even a small forest fit in there. Me and my friends met every day after school to play football on the meadow. We had build a goal out of some rusty iron rods and had pinched a net from the trainings grounds of a nearby football club. Sometimes I played as a striker, sometimes as a defender. We switched positions and team membership with every game. We played all day long. When night fell our parents stepped on the balconies calling for us. “Florian!” from the upper left corner. “Matthias” from right next to it. Finally, my father would call me. I would go home, eat supper and dream about the next days matches on the meadow. That was normal.

It is my seventh week in the country and I got used to a couple of things. When I go to the Palestine city of Ramallah I have to cross a checkpoint called “Qalandia”. It sits in the landscape like an ugly duck. The Israeli soldiers guarding it sometimes quack orders into their microphones when you pass it. I had respect when I crossed it the first time two years ago, now it had become a mere nuisance blocking my way and stealing my time. I would have never imagined that it would be an image of Qalandia that would shake me the most in this crisis. I came across it on Twitter. It showed flames raging around the watchtowers and young Palestinians who were demonstrating for their peers in Gaza. In fact, it was not a special picture at all. The photos the journalists in Gaza sent home were more impressive, more humane, more dramatic. They looked like they captured the essence but did not, at least not for me. It was a picture of a besieged checkpoint that captured it. Because I thought I knew this checkpoint. It was normal to me – and suddenly stopped being.

Last Saturday I went to the beach in Tel Aviv to see how things were going there, to see if this ever-buzzing city got changed by the first rocket sirens since 1991 or not. It did not. Fishermen were trying there luck at the shore, joggers passed me, parents with their children, strollers. A pleasant day. Sitting down on a bench I met a lady and her husband. They asked about my whereabouts, heard the answer, invited me to have coffee and almost instantly told me of their recent trips to Germany. How they loved the alps, and the lakes between them, the picturesque landscape of Bavaria and the changes Germany had undergone since… the war. It turned out that the mother of the husband had fled Berlin when she was 8 years old. For her son, sitting in front of me, talking to me in German, Germany always was something shadowy, something no-good. He was even scared a little bit of the language. Until he finally decided to see the country for himself and to learn the language. When we said goodbye to each other he said: “Isn’t that strange? We were sitting here talking and only 40 Kilometers south the rockets fall without a pause?” I agreed and I felt compelled to underline his point: “Sitting here, talking about Nazis and the Holocaust”. I kept my mouth shut.

The football you can see above embodies best the concept of normality in Israel and Palestine. I found it at a small Arts Festival in Ramallah. It weighs nine kilograms and is made out of concrete. It is a football that cannot roll. But it is a football at least.